Politics, Religion, and All of Reality (kinda)

Scholars live by a rigid law: Publish or die. Theologians abide by this rule, and sometimes they publish systematic theologies, which can become great life's works, spanning decades, encompassing volumes, and generally boring the hell (or heaven) out of theology students. I have Karl Barth's Dogmatics on my shelf, and from time to time I actually contemplate making my way through the nine fat volumes. I collected other ST's over the years, as well. One of my favorite teachers in seminary was Wartburg's president emeritus, WIlliam Weiblen, who charmed us as much by his warm spirit than his clear mind. Bill was a Paul Tillich fan, and he taught Tillich's theology every year because, being emeritus, he could teach whatever he wanted.

So, in regard to Reason, Tillich found three separate polarities.

ONE, the tension between Autonomy and Heteronomy.

TWO, the tension between Absolutism and Relativism.

THREE, the tension between Formalism and Emotionalism.

That's a load of words there, with lots of -isms, and so I want to tackle this first one today.

Autonomy, in extreme, is individualism, anarchy, holding to no law but one's own. There are, of course, advantages and disadvantages to every extreme. Complete freedom would be an advantage here, and perhaps extreme loneliness or isolation would be a disadvantage (it's relative how attractive any extreme might be, but it's more or less universal to everyone's experience - that is, no one can ever experience TOTAL autonomy, perhaps, but we can all dream of it (or experience nightmares, depending).

Heteronomy, which forgive me, is a horrid word, means "Rule by Other" we all experience as children, and many people have experienced as subjects to absolute rulers. Again, this can be attractive, and it can really be horrible, depending. Many people in their deepest longings yearn for their childhood when all decisions were made for them, all needs provided for them. That's the positive side. Being in prison would be a good example of harsh heteronomy, as would being under Hitler, or Stalin, whoever.

NOW, Revelation 'resolves' the tension of this polarity, this line between 'autonomy' and 'heteronomy,' by announcing the Emmanuel, the God With Us, Jesus who became human, who lived and suffered and died and was resurrected. This Jesus, revealed in the Gospels, part of the Revelation of God, demanded obedience. And then he DIDN'T demand obedience. Same guy who said "Come to me, all who are heavy laden.," said, "If anyone would follow me, let them deny themselves, take up their cross, and follow me." Further, Jesus says himself he could summon legions of angels to rescue him from Pilate and the chief priests during his trial, but refrained. He demands total obedience, but refused to enforce that demand.

In our present world, Jesus is REVEALED in the Body of Christ, which in its local setting can be, well, demanding of obedience, and yet has always been leery of enforcement. At its worst, the Church has fallen off of this polarity between autonomy and heteronomy, either not caring if people should obey on the one hand, or obsessing that people obey on the other. At its best, however, the Church has been a spiritual community where obedience is demanded, guidance offered, and community restored. Who rules, Which rules they enforce, and who is subject to those rules is always judged by the community. No one, not the pastor, not the council, not even the worship team can enforce rules on others without the will of the whole community, which is filled with the Holy Spirit. So it's NOT autonomy, because you can't just do what you want, not if you want to be part of the nurturing community. And it's NOT heteronomy, where someone ELSE tells you what to do, because EVERYONE has a voice in the church, if it's functioning properly. God knows, it has it's problems, but that's how it looks when it's doing well.

Over the years I have looked at the world through this Tillich colored lens, and it helps me make sense of tons of stuff, especially human conflict. We all live along these polarities, never at the extremes. We live in a world we could THINK is made up of 'Liberals' and 'Conservatives' and nothing could bring them together, they are EXTREMES.

But that's not true at all. There are precious few absolute extreme liberals, and there are very few absolute extreme conservatives, because the extremes are dead ends, great for dogma, great for idealism, but deadly to real people in real life situations. We are all on a line between the two poles, some farther right, some farther left, but we're all here in the middle somehow. The closer we are in the middle, the less stress and name calling we endure. The farther we grow apart, the more tension we endure. When we talk TO others, try to understand them, we ease the tension. When we talk ABOUT others, call them names, tell others about how dangerous THOSE people are, then we're heading for trouble. 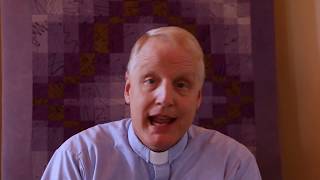 Reflecting on 50 years of Ordination of Women: Where are we today?

Why go to church?

Politics, Religion, and All of Reality (kinda)

The Gospel Amid Politics